You are here: Home / Culture / One of my Stalkers was Arrested for Soliciting Sex of a Child

UPDATE: Peter Bright has been convicted. 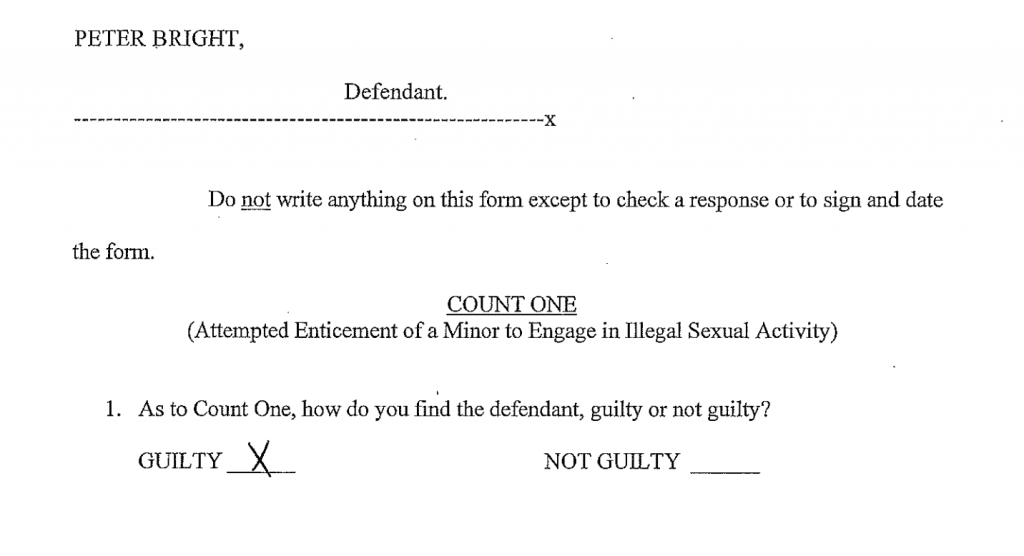 In what can only be described as a pattern, yet another person who has stalked and harassed Mike Cernovich has been arrested.

The Daily Dot broke the story:

Tech reporter Peter Bright has been arrested for soliciting sex with children online. He was employed by Ars Technica until recently.

The allegations are stomach turning and not the kind of content suitable for this website, which is focused on mindset and personal development.

But you often see people attacking me, and you need to know the kind of people who harass me and my family.

At Bright’s urging, the two then began chatting via WhatsApp, which continued for a few weeks. At times using euphemisms, Bright reportedly wrote of molesting both children and raping the 7-year-old. He also allegedly sent pictures of his penis, and photos of test results showing he did not have any sexually transmitted diseases.

According to the complaint, both consistently referred to his plans to molest the children as “teaching” them “lessons,” and Bright described how he would begin slowly and move on to more intense sexual activity.

“I’m thinking maybe something involving foreskin is the way to start,” he allegedly said.

The agent writes that Bright inquired about whether the “lessons” were to be heteronormative. When she professed ignorance, he explained, “Does [the Girl] eat flowers and [the Boy] suck snake.” The document says that the agent understood “flowers” and “snake” to mean vagina and penis, respectively.

Posting on Twitter with a verified account as @DrPizza, accused child sexual predator would often join harassment mobs against Cernovich.

The child sexual predator and pedophile called Cernovich a Nazi.

This person who stalked and harassed me was arrested as a child sexual predator.

When you see people attack me / my family, know this is what they are. https://t.co/EEETIwl0ex

The child sexual predator also called Cernovich “off the rails,” in a conservation he had with his good friend Charles Johnson of Little Green Footballs.

You are going to prison. You can’t even reply now as you’re being held without bail as a child sexual predator. https://t.co/ADIlh9M1NA

This man was arrested for allegedly soliciting sex with children.

As you can see, there is a pattern to people in the media who attack me. https://t.co/vr8yxiN1SM

Peter Bright isn’t the first pedophile to harass me or my family, as a Columbia University Student and member of their student newspaper led a protest against me during my college talk.

Peter Bright also amplified this harassment campaign against my family and interacted with my stalkers and those who have threatened my daughter.

It’s not mere hype to say that evil and powerful media voices are seeking to silence me, but we will continue to fight back.