In a heated exchange with Congressman Matt Gaetz, Harvard Law Professor Noah Feldman claimed that he was an “impeachment skeptic” until July 25, 2019.

You can watch the full exchange here, where Feldman clearly states under oath:

"Until this call on July 25th I was an 'impeachment skeptic.' The call changed my mind sir, and for good reason."

In a May 17, 2017 story in Vice about the Comey firing, Professor Feldman said:

So just to clarify, this looks like obstruction of justice in the high crimes and misdemeanors sense but not in the Jeff Sessions–led Justice Department will do anything about it sense? Correct. And frankly, breaking the norm of politicizing law enforcement—it’s a great basis for impeachment. It’s not a crime, and in fact it’s in the president’s constitutional authority, but it’s still impeachable. That’s the whole point—the president can do things within his legal constitutional authority where the only sanction available under our system is impeachment.

Feldman doesn’t qualify his statement. He doesn’t express skepticism or doubt. He is clear with his words: “What the president did is an outrage. It’s impeachable.”

Donald Trump’s claims that Barack Obama ordered a wiretap of his phones during the presidential campaign could lead to the Republican being impeached, a leading US law professor has said. Noah Feldman, a professor at Harvard Law School, said the unsubstantiated claims, if proved false, could be a “major scandal” that “could get the current president impeached”.

In the above article Feldman qualifies his statements a bit:

And accusing the past Democratic president of an impeachable offense is every bit as harmful to democracy, assuming it isn’t true. Obama is the best-known and most popular Democrat in the country. The effect of attacking him isn’t just to weaken him personally, but to weaken the political opposition to Trump’s administration.

Given how great the executive’s power is, accusations by the president can’t be treated asymmetrically. If the alleged action would be impeachable if true, so must be the allegation if false. Anything else would give the president the power to distort democracy by calling his opponents criminals without ever having to prove it.

Yet on Twitter on May 17, 2017, when asked about Trump’s decision to fire Comey, Feldman was unequivocal: “Their legally novel reading of “corruptly” wouldn’t fly in court. But we agree that this is impeachable!” 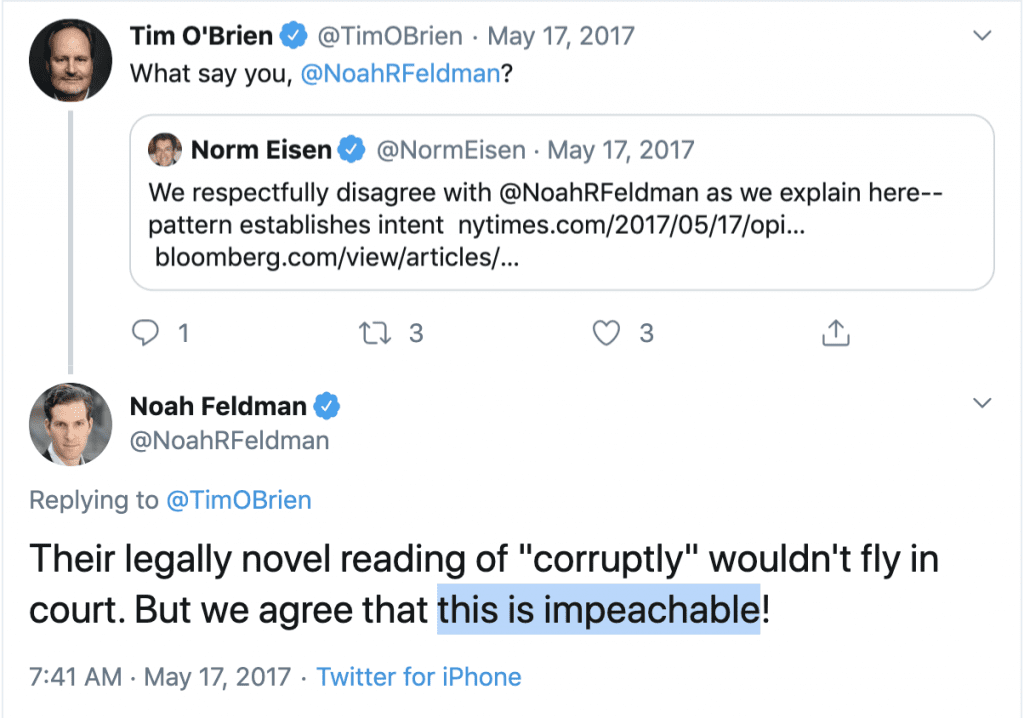 Feldman is thus on record twice in 2017 claiming that Trump’s conduct was impeachable.

How does Feldman’s clear and unambiguous language square with his testimony today that, “Until this call on July 25th [2019], I was an impeachment skeptic.”

Feldman’s testimony shows that this entire process is dishonest and without any respect for the rule of law.