I was in the law school career services center when I got the call from a friend of mine from OCS. Brian Slavenas, this friend who called, and I were buddies during OCS. We didn’t really fit in as we found the military disciple and f*ck-f*ck games stupid. Every month we’d meet up and deal with the stupidity. (We were in the National Guard at the time, and OCS was divided over 18 months rather than the all-at-once 12 week program at Ft. Benning.)

In military units you have squares, criminals, and non-conformists. The squares act as little drill instructors and yell at their fellow soldiers for not following The Book. Criminals are the scum bags in the military you’re not allowed to ever talk about, because it would be unpatriotic to stop pretending that everyone who enlists is a regular GI Joe. Non-conformists, which Brian and I were, are people who break the rules but not in an overtly morally wrong way.

My friend would listen to self-hypnosis CDs using a smuggled player and I got into it with the TAC officers after telling them I wanted to be a criminal defense lawyer. (Most of them were law enforcement.)

Brian would pack his Captains of Crush grippers. The three of us were all into strength training and strong man style training, so we’d bond over reps and sets.

To become a Captain of Crush, you had to send in a picture of yourself closing the #3 gripper, which required nearly inhuman levels of strength.

Whenever I think about Brian, I wonder if he ever managed to close the #3.

Brian was an unusual person in every positive sense of the word. Some reports of his death listed him at 6’5″, but he seemed taller, as he’d walk up every other step in a normal stride as I picked up the pace to keep up. Muscular like a bodybuilder, he was an Engineering major and bright. And also incredibly insecure.

Imposter Syndrome hadn’t caught on in the TED talk set yet, but Brian was no better example of someone who had it all but felt inadequate for no rational reason.

His shyness, especially when it came to girls, led to my friend and I teasing him often. “Brian, if I looked like you, imagine what I’d do!” 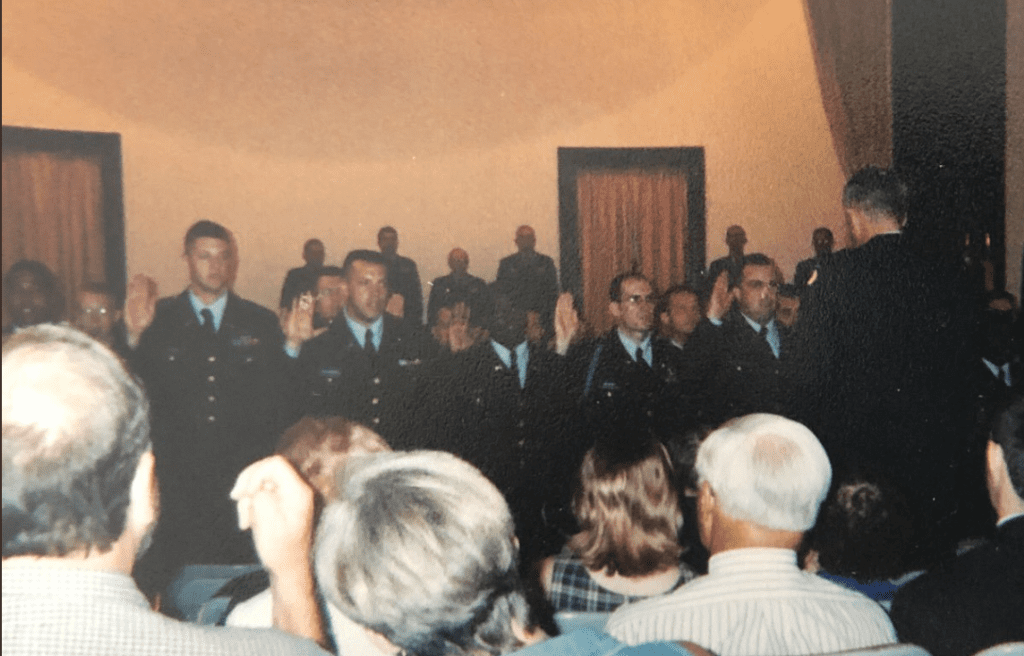 After OCS, I left for law school in California.

Brian was shot down flying troops home on a rest and relaxation leave.

Brian’s mother took the loss hard, as one would expect, and she didn’t want any of his friends from the military to attend his funeral.

“When they needed blood, they called it Patriotism. However, let those same yokels and suckers try to express those feelings in ways that didn’t involve killing strangers….then The Powers That Be had The Talking Heads resurrect the specter of the long-dead Third Reich and trot out cliched shaming language with words like Nationalism.” – Samuel Finlay, Breakfast with the Dirt Cult.

The reporters who lied about WMDs in Iraq kept their jobs. The chickenhawks who cried for war received promotions and became leaders of the conservative and neoliberal establishments.

When will we have a national holiday where we line up Bill Kristol, the editorial staff of the New York Times, Bill O’Reilly, Dick Cheney, and the the rest of these war criminals and chickenhawks and make them hold their heads in shame?

.@BillKristol—often wrong, never in doubt—wants to debate @BernieSanders about the IRAQ WAR. Sanders shouldn't waste his time, but Kristol might reflect on this, from 3/28/2003: "The American people…understand that it could take a month or two months, not a week or two weeks." pic.twitter.com/UejUWBrAUf

In cognitive psychology there’s a concept known as survivorship bias. When one person survives (usually this means they succeeded or had a major investment gain), we reason backwards to explain why they lived.

Brian died and I lived. There’s no good reason for this. I moved onto law school as planned, with no knowledge that 9/11 would happen. Brian continued his studies and served as an aviator.

There’s no reason one man lives and other dies.

And by any objective measure, Brian deserved to live more than I did, and certainly more than most others. He was one of the men who are legitimately good people.

Adding to the sense of tragedy is that Brian and I pulled off what seems an unlikely feat. Both of were profiled in the New Yorker.

Me for living, and him for dying.

Like Brian’s mom I share a special contempt for the war mongers, as I told a reporter:

“Some people say they hate Beltway insiders and establishment media types, but it’s actually sour grapes,” Cernovich said. “Deep down, they want the cool kids to love them. I actually fucking detest those people.” He grew up in Kewanee, a farming town in Illinois. Not long ago, he said, “I started looking into who these neocon policy wonks are. Every backstory was the same—East Coast, Harvard, trust fund, nepotism. Look, if the experts decide tomorrow that we’re going to war with Russia, who’s gonna fight that war? Jonah Goldberg and Ross Douthat? Fuck no. It’ll be guys I know from Kewanee.”

On Memorial Day I don’t want to hear a thing about service or freedom from those who stayed home while sending others off to die.

For those who have lost, may God bless you and let their memories be a blessing.