Christine Blasey Ford’s accusation against Supreme Court nominee Brett Kavanaugh is the perfect plot twist for our divided time because either side has a credible way of defending and attacking her.

You can feel self-righteous by opposing or supporting her,
as you can make an equally strong case for either position.

Timing of the accusation.

She waited until the nomination was closed to stall it,” you’ll say if you don’t want to believe her.

“The media outted her,” is a credible reply, “which left her with no choice but to come forward on her own terms.”

I had Blasey Ford’s name yesterday. Someone tipped me off that she had begun scrubbing her social media accounts, and thus I Tweeted out, “Fireworks this week, as social media showing far left wing activism has been thoroughly scrubbed to prepare for a narrative that she’s disinterested and not politically active.” 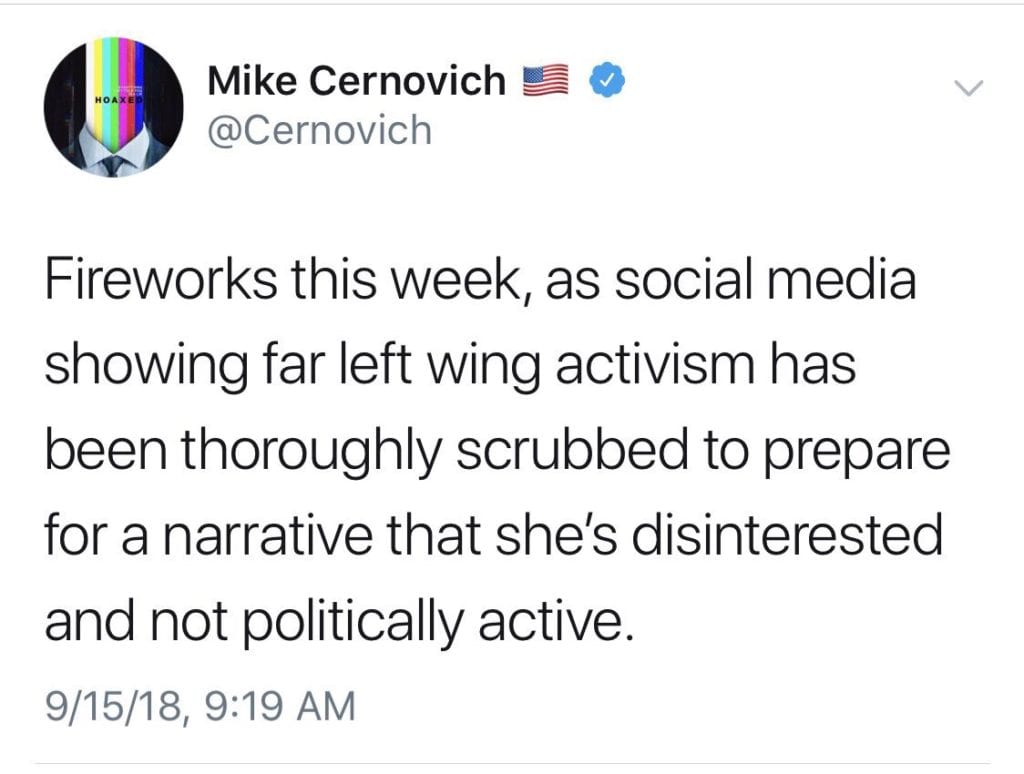 Days before going public with her allegation against Kavanaugh, Blasey Ford deleted all of her social media profiles, including her Facebook page. She had “liked” many far-left wing pages.

Some will say Blasey Ford deleted her social media to hide her far left wing affiliations.

Others will say, equally plausibly, that she doesn’t want randos sending her nasty messages via social media.

The allegations are she-said, he-said. You either believe her story, which is plausible, or you believe his explanation, which is also plausible.

I also think Kavanaugh's AGE is the huge factor here. He was a 17 year old child (still a minor – a CHILD in legal and worldly terms) — this wasn't mature, willful 30 year old man

Complicating matters is that false memories are a real phenomena.

Blasey Ford may believe her allegations against Kavanaugh, and those allegations may be a hallucination.

The only other person at the alleged event has a last name of “Judge.” Now let me tell you how false memories form. ⁦@Cernovich⁩ https://t.co/3Bsi11Ex37

No one knows the truth, and neither side can prove his or her case.

We’ll instead scream at each other based on our understanding of the world, and all evidence that comes in will be filtered through these biases we hold about the world.

And if you’ve read Scott Adam’s book Wing Bigly, you understand that either side will watch a different movie.

You couldn’t script a better story.