“If Trump is nominated, the GOP must keep him out of the White House,” Tommy Tuberville’s senior adviser Rob Jesmer Tweeted, in a series of anti-Trump, pro-amnesty Tweets going back years. An investigation into Tuberville staff shows hostility towards Trump’s agenda and trump’s supporters.

Jesmer is Tuberville’s media adviser and is rumored to be in contention for the coveted chief of staff position in an Tuberville administration. Jesmer will be calling the shots on immigration.

What’s interest about this Tweet is that Jesmer added the picture himself. Often times an image will auto-populate when you post a URL link. Jesmer included this picture to mock a female Trump supporter. To Jesmer and his Trump-supporter hating friends, this is a bad image.

She looks like a patriot to me. Tuberville and his team hate patriots who fly the American flag. 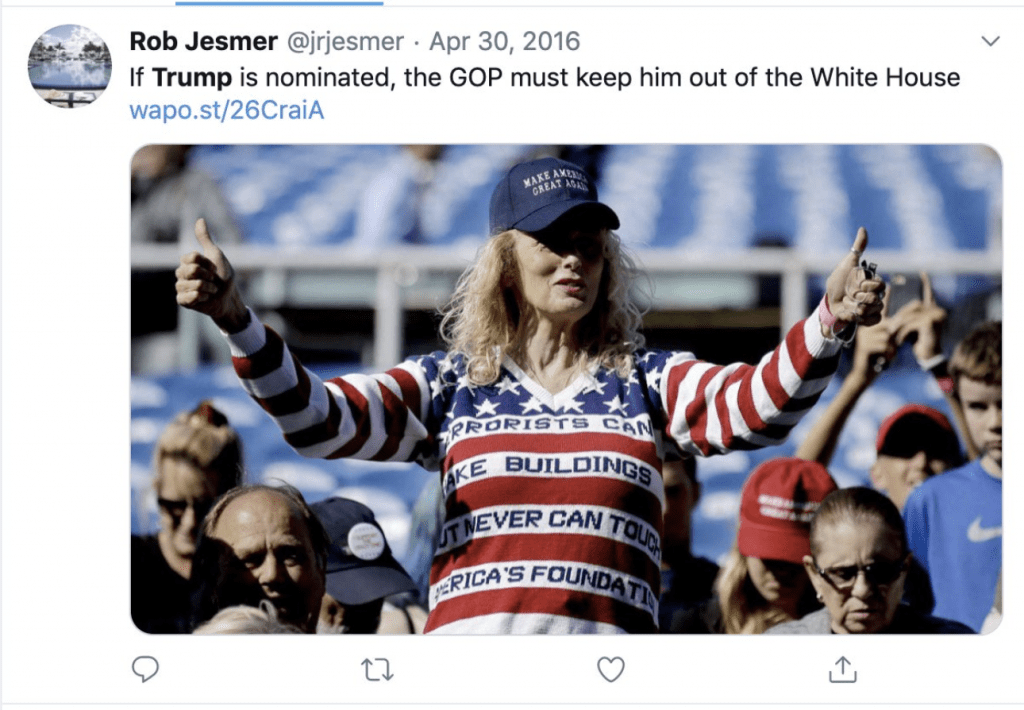 Jesmer is also funded by the open borders lobby, and he has Tweeted out his support for amnesty.

George Will nails it re immigration reform http://t.co/7UmNPFKgDP

Trump has endorsed Tuberville, who leads the poll in the Alabama Senate primary against immigration hawk Jeff Sessions.

Trump previously endorsed Luther Strange over Mo Brooks, leading to a humiliating primary loss for Trump and ultimately the loss of a Republican vote in the Alabama Senate.

Given Tuberville’s hatred for Trump voters and the MAGA agenda, history may repeat itself.