You are here: Home / How a Convicted Terrorist used the Southern Poverty Law Center’s Website to Identify Targets

Floyd Lee Corkins had a plan. He took his gun into the Family Research Council building. His was going to kill as many people as possible. An armed guard stopped him from going on a planned terror rampage.

In never-been-seen images, we retrace Corkins domestic terror attack, which was inspired by the Southern Poverty Law Center’s decision to label the FRC a hate group.

(Surveillance images show Corkins pull out his 9mm handgun before firing on the FRC’s guard.) 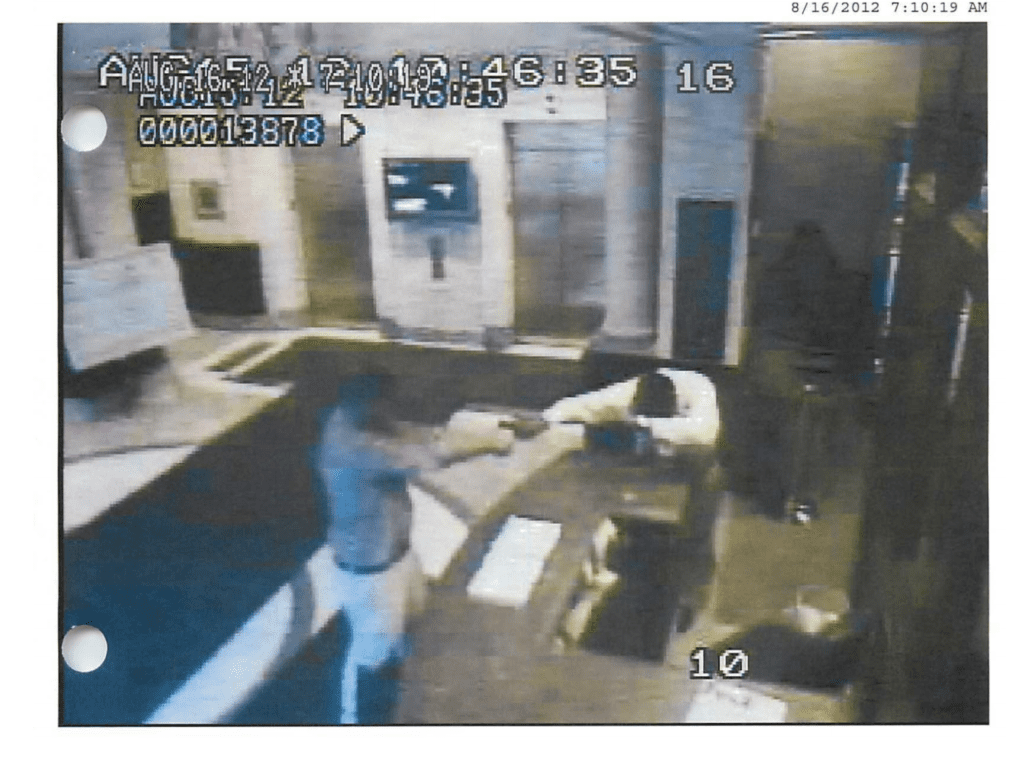 According to court records, Corkins was a political activist before becoming a terrorist. He was especially concerned with gay rights issues, as many were at the time. (To their credits, every gay rights group explicitly disavowed the attack, while the SPLC remained silent.)

Fast-food restaurant Chick-fil-A had found itself in a controversy of its own, as chief operating officer Dan T. Cathy had opposed gay marriage.

Corkins plan was to commit a mass shooting at the FRC and then smear chicken sandwiches all over his victims faces. 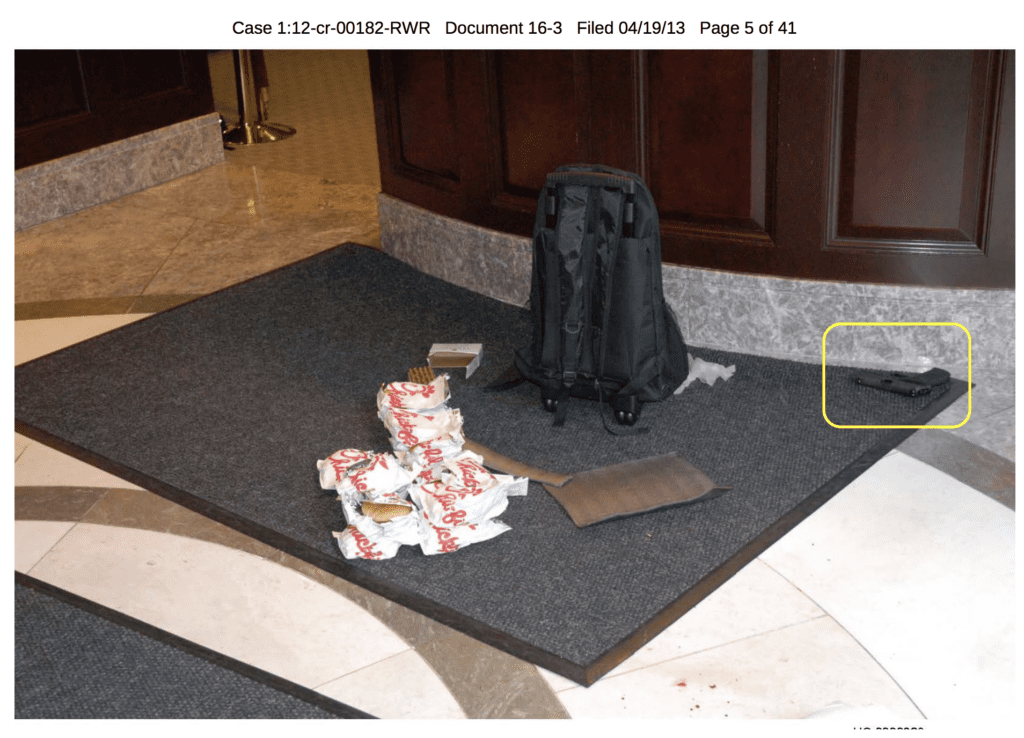 Corkins opened fired before being stopped by an armed guard. Showing the hypocrisy of “anti-hate” activists like Corkins, the hero armed guard was an African American man. Out of consideration of the man’s privacy, we will not be publishing hospital-scene photos of the injured man.

According to official court records, Corkins “told the FBI that if the police had not responded and caught him at the FRC, he intended to go to the second organization on his target list and perpetrate a similar shooting there.”

(This redacted exhibit from the FBI shows that Corkins had identified four targets in total.) 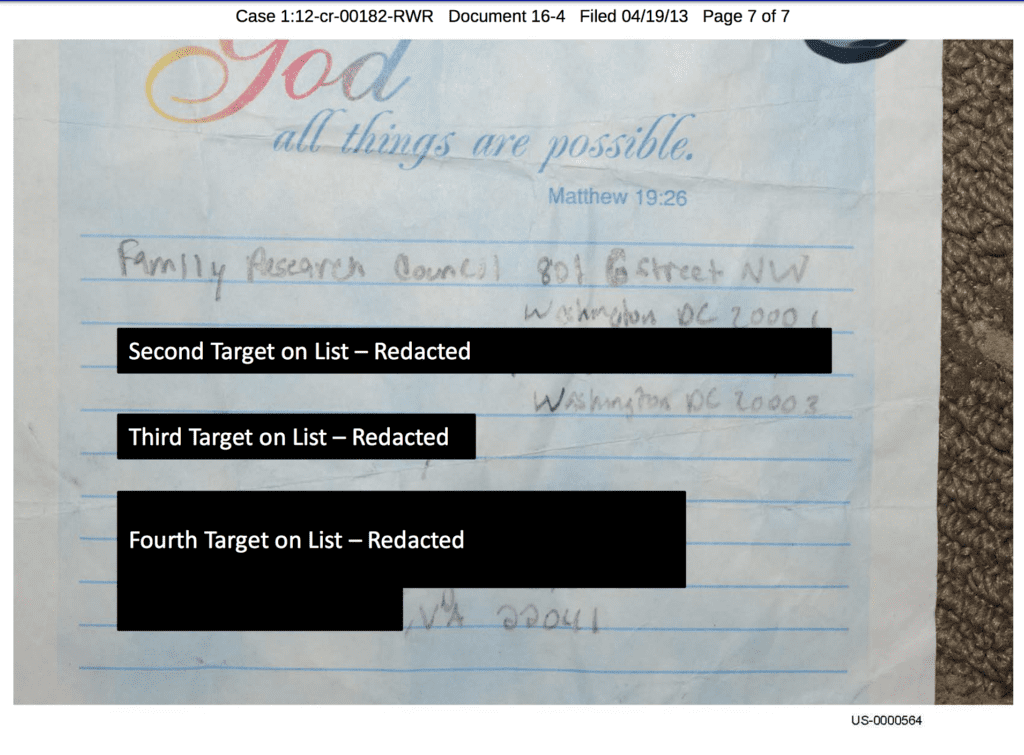 Official court records show that Corkins was inspired by the SPLC to commit terrorism.

Corkins pled guilty to act of domestic terrorism in exchange for a 25 year prison sentence. During his interviews with the FBI, Corkins explained his plans and how he chose his targets:

He was a political activist and considered the FRC a lobbying group. He committed the shooting for political reasons. He identified the FRC as an anti-gay organization on the Southern Poverty Law Center Website. He had been thinking about perpetrator similar violence for years, but just never went through with it. He purchased the gun the Friday before the shooting from Blue Ridge Arsenal. He converted the pistol from a .20 caliber to a .9-millimeter pistol to, quote, be more effective, end quote. 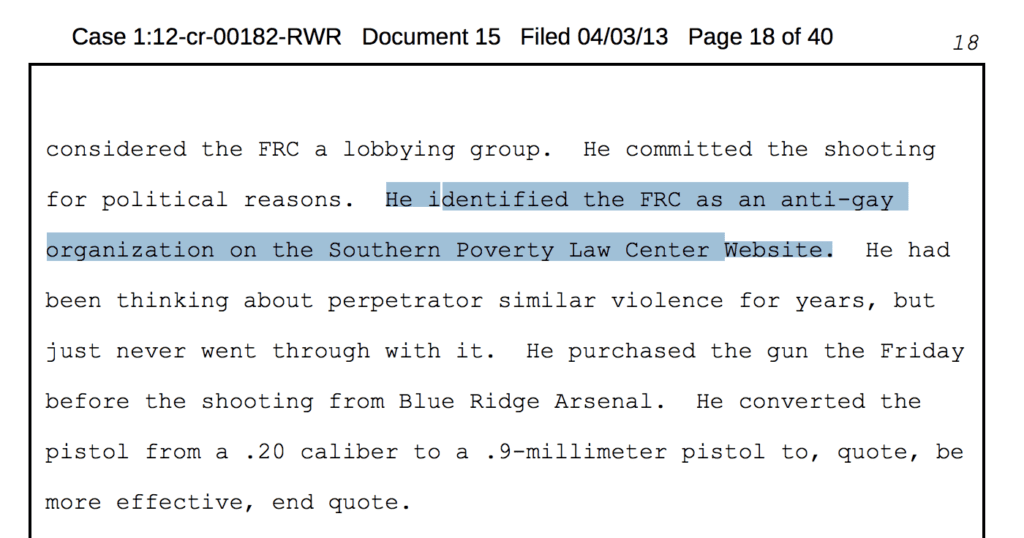 Corkins left and returned the next day, Friday, August 10th, to pick up the pistol. The selection and surveillance of the FRC and other targets. Consistent with his statement to the FBI, a subsequent search of Corkins’s family computer revealed that on the afternoon of Sunday, August 12th, Corkins used the computer to visit the Southern Poverty Law Center’s Website, as well as the Websites for the FRC and the second organization on his handwritten list. 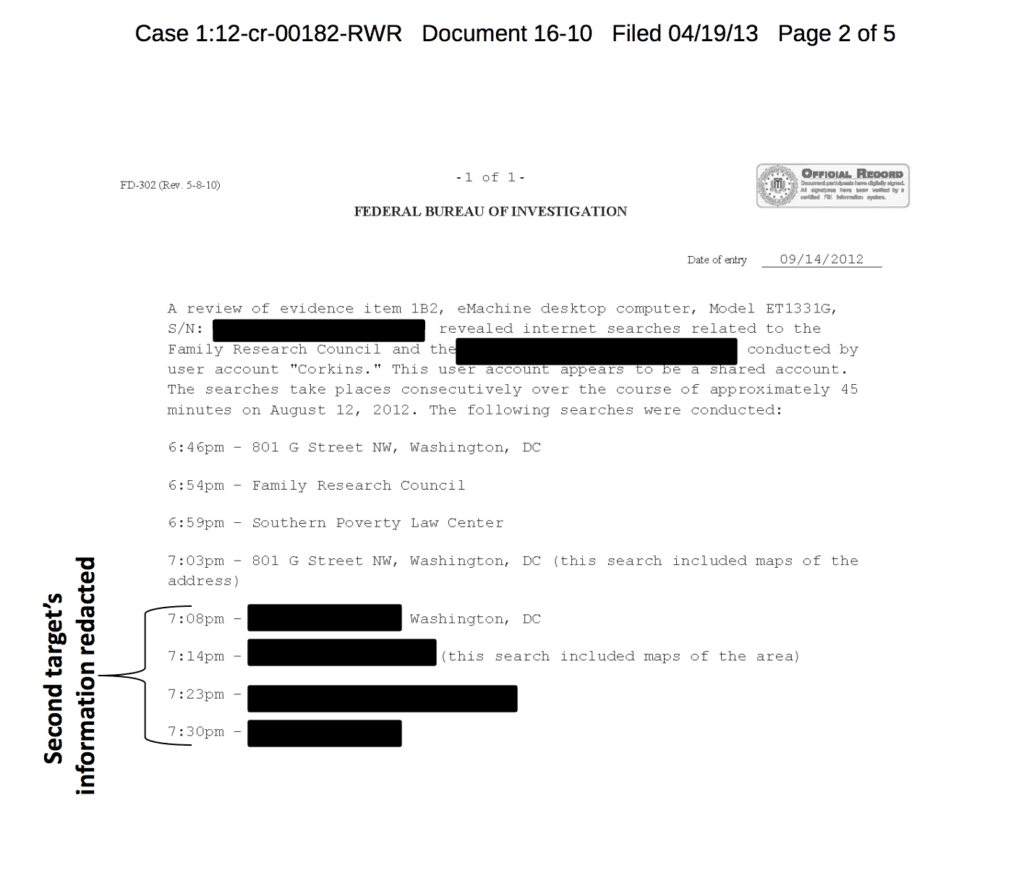 Given that court records clearly show Corkins was inspired by the SPLC, you’d think his shooting would be a bigger discussion among the media.

After all, the SPLC has begun adding conservatives like Ben Carson and other political enemies to its “hate watch” list.

The SPLC removed an African American surgeon and presidential candidate from its extremist list only significant criticism from pretty much anyone not named Floyd Lee Corkins.

The SPLC was also forced to pay anti-terrorism activist Maajid Nawaz $3.4 million dollars for slandering him.

Given that at least one convicted terrorist relied on the SPLC for target selection, you’d expect critical media coverage of the SPLC.

And you’d be wrong.

According to far-left wing website Snopes, which Facebook and other social media companies rely on as a trusted fact-checking source, the SPLC did not inspire the FRC shooting:

However, the implication that the Southern Poverty Law Center inspired or encouraged these acts of violence has no discernible basis in fact.

The claim that, “The Southern Poverty Law Center is a ‘left-wing smear group’ that incites hatred and violence against conservatives,” was rated FALSE by David Emery of Snopes. 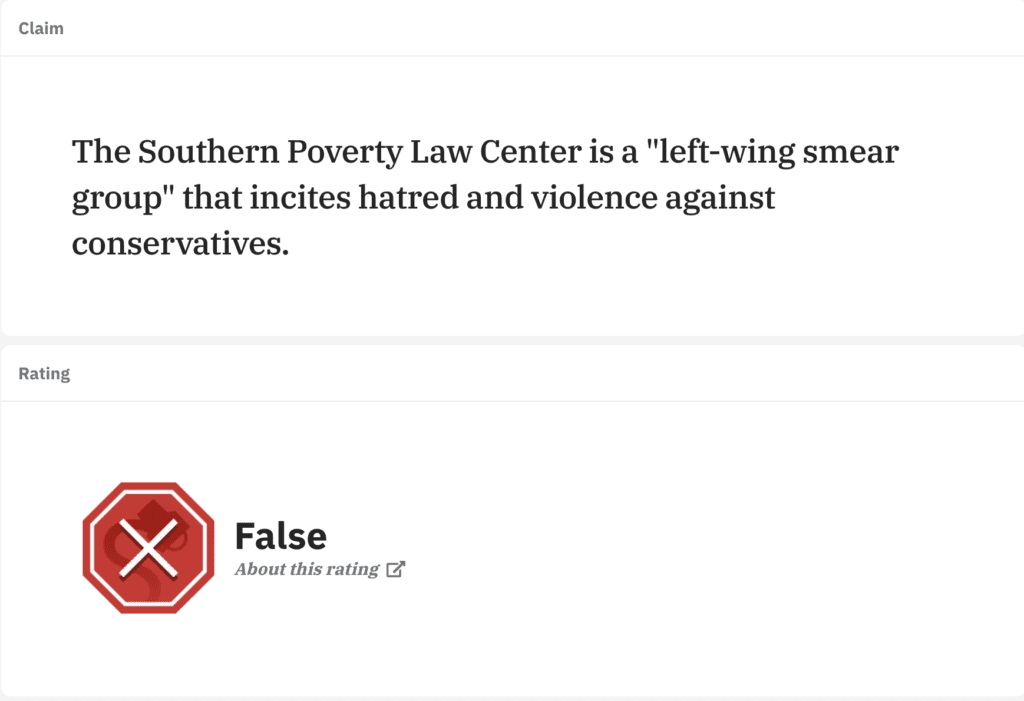 Snopes is lying about Corkins’ motivations, as court records show.

The FBI’s transcribed interview with Corkins leaves no ambiguity about Corkins motivations or inspirations:

(Screen shot from transpired interview between an FBI Agent and Floyd Lee Corkins.)

And as stated in the plea agreement, “[Corkins] was a political activist and considered the FRC a lobbying group. He committed the shooting for political reasons. He had identified the FRC as an anti-gay organization by the Southern Poverty Law Center.”

More broadly, the failed terrorist attack of Floyd Lee Corkins shows that the media shouldn’t treat the SPLC as an anti-hate group.

Their own followers choose their targets, in Corkins’ words, to “kill as many people as possible.”

Corkins had planned on attacking a second target, although court records redact the name of the second target.

Corkins: I wasn’t quite sure what I was going to do afterwards. I figured that by the time I started doing it, the police would have came. So I kind of anticipated that I probably would be arrested today.

Corkins: Um, if I didn’t, I had an alternative plan that I was going to get on the metro and go to the , which is an organization kind of like the American, uh, Research Council.

Agent 1: Okay. Corkins: Uh, and I was going to try and do the same thing. 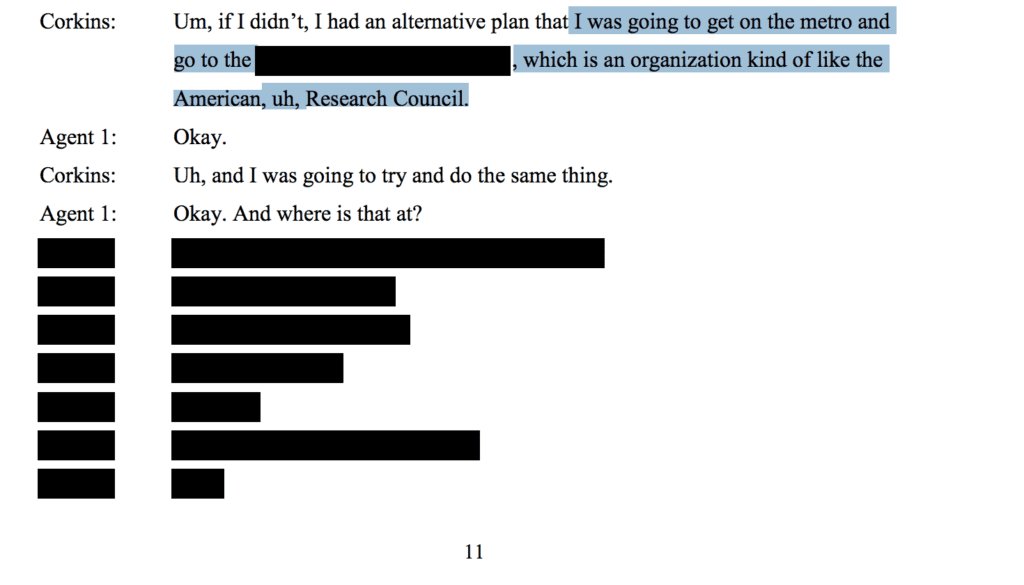 Reporting at the time of Corkins’ arrested suggests the second target was the Traditional Values Coalition, which had also been identified as a hate group by the SPLC:

Federal authorities also confirmed Corkins was carrying a note with contact information of a second Christian conservative organization, the Traditional Values Coalition, said the group’s president, Andrea Lafferty. She did not say whether her group was being targeted.

Corkins had planned on murdering staffers at the second organization as well:

Corkins: Yeah, I was going to go directly there.

Agent 1: Okay. And what would, what would have been your plan there? To shoot everyone there?

Corkins: Yeah. To try to, yeah.

Agent 1: And then from there what would you have done?

Corkins: Uh, if I didn’t get caught I would have gone home and kind of planned more, to do more shootings and stuff like that. 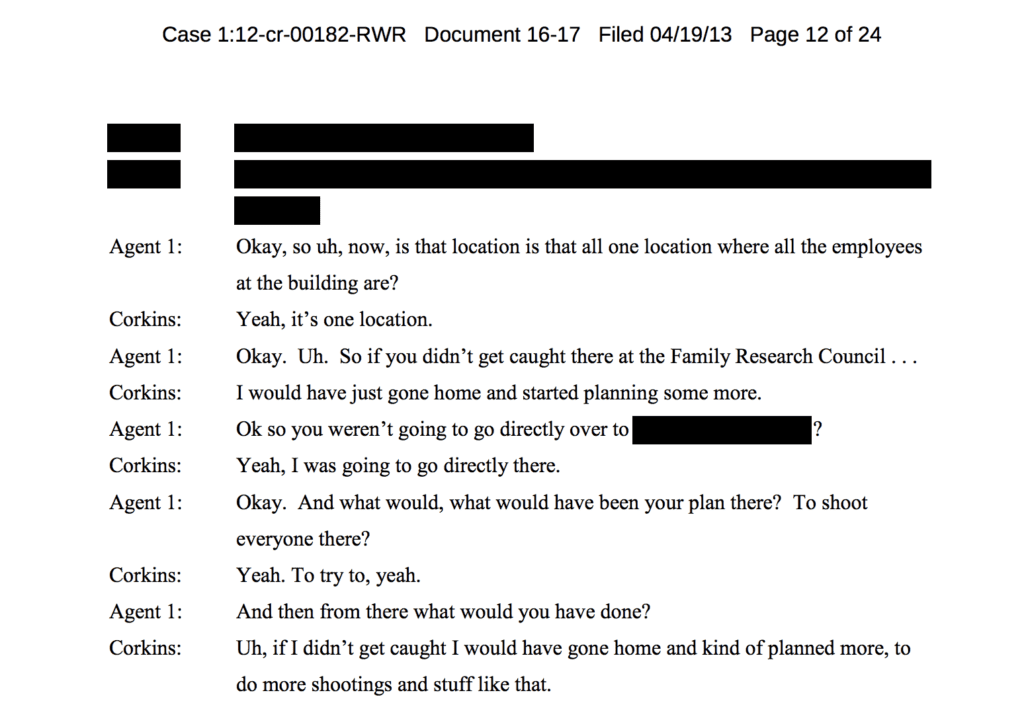 The Media largely ignored the SPLC’s Role in the Corkins Terrorist Attack. 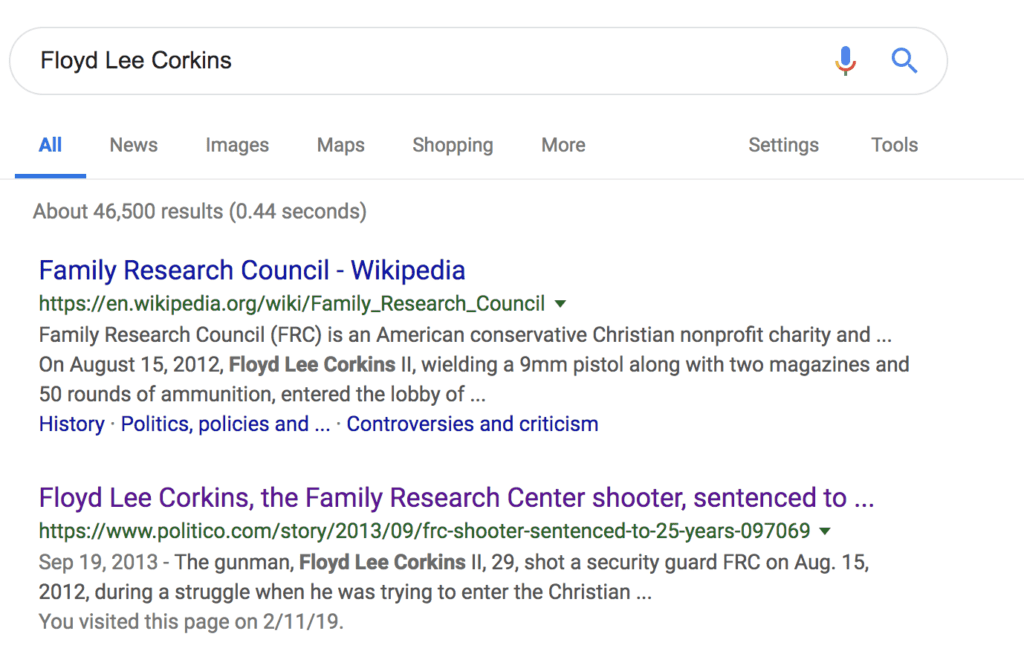 Once you add the Southern Poverty Law Center into the mix with a “Floyd Lee Corkins +SPLC,” search, you get only 303 results.

This omission would seem peculiar, until you’re reminded that fact-checking site SNOPES, rather than ignore the SPLC’s involvement in the Corkins shooting, actively lied about what’s contained in court records.

Far from being a neutral advocacy group, the SPLC actively inspires and incites terrorism against its political opponents within the United States.

Don’t take my word for it. Take the words of its own homegrown mass shooter, Floyd Lee Corkins

“I went to kill as many people as possible.” 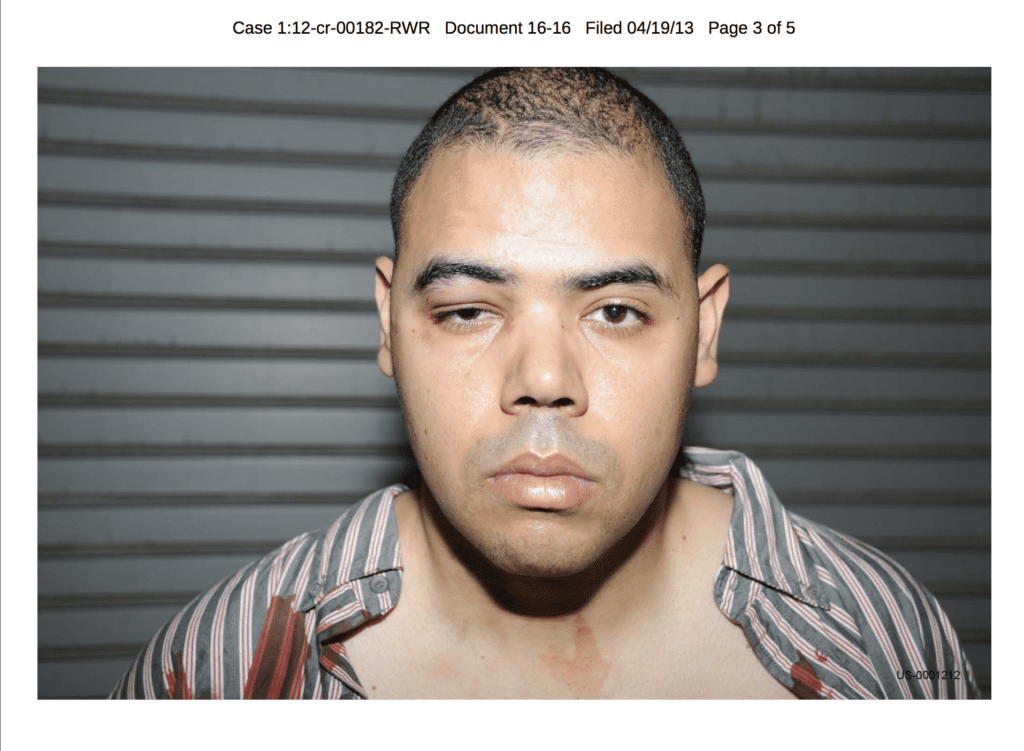